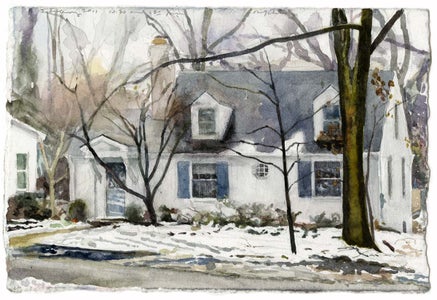 r/e projects, a platform for programs, publications and exhibitions, Madrid, Spain
Drawings by the artist in the holdings of r/e collection

Printed Editions, A community of print dealers, print studios and print collectors
A listing of selected prints by the artist

Charles Ritchie: Self-Portrait with Lamps and Open Journal, Jason Haam
Discussion of the drawing and the artist's creative process, 5 August 2020

Artist in the Studio Feature on Instagram: Charles Ritchie @JasonHaam
Entries focused on the artist at work, presented April 2021

Charles Ritchie, Ars Libri 7, Boston, MA
Steven Andrew Holmes, artist and curator discusses the exhibition of drawings from the Cartin Collection which was on view 3 April - 31 May 2009

60 Seconds with Charles Ritchie, The Columbus Museum, Columbus, GA, 17 April 2020
Online discussion of the drawing, Self-Portrait with Mirror and Drawings, from the museum collection

In a Sentimental Mood by Duke Ellington, A film by Paul Glenshaw featuring the bass of John Previti and art of Charles Ritchie, 3 April 2020
A short film for the Seven Tones Project, a collaborative initiative pairing musicians and filmmakers to create short films inspired by the music of Duke Ellington

A Muse and A Maze: The Mysteries of Fiction Writing, 23 November 2014
Author Peter Turchi discusses his book and touches on the art of Charles Ritchie on North Carolina Public Radio, WUNC

Charles Ritchie: Dust and Shade exhibition at Gallery Joe, 17 October 2011
A video walk-through of the exhibition

Into the Light, 2 October 2011
Edith Newhall, The Philadelphia Inquirer

Philadelphia Inquirer, 9 November 2008
Through His Window, A Distinctive View

From the Inside Looking Out: The Journals, Drawings and Prints of Charles Ritchie
Exhibition Catalogue

Franz Bader, the legendary Washington art dealer and bookstore owner, nurtured local artists during his lifetime, and he continues to do so long after his death.

The Franz and Virginia Bader Fund, established in 2001 in accordance with the will of Bader's widow, Virginia, awards grants to visual artists who are at least 40 years old and live within 150 miles of Washington, D.C. Since 2002, the Bader Fund has distributed $245,000 to 13 grantees. Two to three awards of between $15,000 and $25,000 are given each year. They can be used for any pur­pose, such as time off from a job, travel, working in other media, or remodeling a studio. The most recent grants, announced in December 2006, went to three artists, including, for the first time, two photographers. The recip­ients are photographers Frank Hallam Day, Washington, D.C., and Joe Mills, Annandale, Virginia, and Philip Geiger, Charlottesville, Virginia, a painter.

The first exhibition of Bader Fund recipients' work was held November 8, 2006-January 26, 2007, at George Washington University's Luther W Brady Art Gallery. One hopes it will become an annual event! Michael O'Sullivan's glowing January 12, 2007, review in The Washington Post brought visitors to the show. Before then, O'Sullivan reported, the Bader prize winners, "seem habitually to have received less publicity than, say, that of the winners of the Trawick Prize or the Bethesda Painting Awards, both of which feature annual showcases devoted to the competi­tions' finalists."

"The Franz and Virginia Bader Fund: Artists of the First Three Years" was organized by GWU University Art Galleries director Lenore Miller and Johanna Halford­ MacLeod, the Bader Fund's executive director. It featured oil paintings, works on paper, and sculptures by seven artists who received grants in 2002-2004. Among them were Kevin MacDonald of Silver Spring, Maryland, the late printmaker and painter to whom the show was dedi­cated, and Charles Ritchie, also of Silver Spring, whose specialty is drawings and prints. Also in the show were works by sculptor Yuriko Yamaguchi of Vienna, Virginia, and paintings by Steven Kenny of Washington, Virginia, and by Scott Noel, Alex Kanevsky, and Susan Moore, all of Philadelphia.

O'Sullivan found that MacDonald's two prints and one painting were "inspired by the architecture and angst of suburbia" and "seem to throb with an otherworldly power." They have, he wrote: a pull that is, I think, universal in these meditations on memory, longing, and loss. A similar pull can be felt in Ritchie's works, especially in the two small drawings identified as-but not immediately obvious as-self­portraits. Gradually, it becomes apparent that the images are reflections in windows ... Like MacDonald's work, the built environments around us seem meant to be read as stand-ins for our own theatrically shadowed psyches.

Ritchie has been with the National Gallery of Art, where he is currently Associate Curator of Modern Prints, for 27 years. He used his Bader grant to take time off so he could concentrate on a series of nocturnal self-portrait drawings and a mezzotint with soapground aquatint. He also filled nearly two handmade books with writing and color images. "I work fairly slowly and usually complete six to seven drawings a year," he said, "The Bader Fund grant gave me time to prepare for a show last year at Gallery Joe in Phil­adelphia that sold out. I credit the Bader Fund with giving me time and getting me straight into a really good gallery."

Bader Fund recipients are chosen by a committee of nine, all friends of Franz and Virginia Bader. They meet in a hotel for two days, reviewing slides and CDs of submitted works, Lenore Miller said.

There were 200 applicants for the three grants made in 2006. While great effort is made to solicit applications, Bader Fund director Halford-MacLeod worries that artists who are not represented by galleries or connected to art schools may not know about the Fund.

Visual artists working in virtually every medium except film, video, and performance art are urged to apply. To date, painters predominate among the recipients, but printmakers, photographers, and sculptors are also represented. Bader was an accomplished photogra­pher and sold ceramic works as well as photo­graphs, prints, paintings, and sculpture in his gallery. The Fund wants its grantees to reflect his diverse interests, and Halford-MacLeod said, "We would love to hear from potters and other craftspeople."

Since most of the Bader grantees applied more than once, Halford-MacLeod's advice to applicants is: "If at first you don't succeed, try again." In addition, artists known in one medium can apply for a grant in another. For example, Richard Weaver, a painter whose work has been exhibited at the Smithsonian American Art Museum, applied for-and won-a grant as a sculptor. "He submitted fabulous terracotta relief sculptures," Halford­MacLeod said, "We all loved them because they were so fresh and different from what people are making that finds itself in galleries."

Franz Bader (1903-1994) was born in Austria, the son of a flour merchant and a painter. By the mid-30s, he owned the oldest bookstore in Vienna; however, after Germany annexed Austria in 1938, Bader, like other Jews, lost his business. With the sponsorship, through a mutual friend, of James Whyte, Bader and his first wife Tony managed to get visas to the U.S. in 1939. When they came to Washington, Bader worked in Whyte's well-known book­store, which sold modern art as well as foreign-language books and maps, until he opened his own art gallery and bookshop at 1705 G Street, N.W in 1953.

Many well-known artists, including American print­maker Peter Milton (1930- ), exhibited at the gallery. Bader was also always interested in late-bloomers: he was the first Washington gallery to exhibit Grandma Moses, and the first commercial gallery to exhibit African­American artist Alma Thomas.

Local artists who exhibited there included WPC artist-­member Barbara Kerne, the NGAs Mark Leithauser, and WPC board member Joan Root. "He nurtured artists and it is wonderful that his nurturing continues after his death," Root said. Bader not only exhibited her work, he also made a great effort to keep her in his circle. When Root decided to leave Washington for New York City, he offered her a small monthly advance so that she could con­centrate on her art. In return, she sent him some of her artwork and he would deduct her advances from the pieces he sold. The arrangement benefited both of them. The advances gave her the freedom to work on her art, and she sent him her best work, rather than sending it to a New York gallery. Root stayed in New York for 11 years and received Bader's advances for the first three years. She never knew if Bader made similar arrangements with other artists, but she suspects that he did. "He had faith in me," she said, "It made me more focused and very serious about my work." Root also reported that Bader had significantly helped her career: a series of lithographs that she produced sold well at his gallery and his encouragement led her to other important professional affiliations.

"Franz brought printmaking as well as works by a wide range of artists to Washington, and he supported both in the sense that he showcased them in a city that then offered little of either," she said.

Bader wanted that support to last. "As Franz grew older, he felt the need to have something continue ... after him, and that was his vision of the aesthetic riches that could be found in the places that too few people looked. It was for this reason that he and Virginia decided to establish a fund to help older artists ... bring their gifts to the world," Richard Conroy writes in a warm and appreciative memoir of Franz and Virginia Bader published on the Bader Fund website.

The Boston Globe, 24 October 2004
More Than One: Prints and Portfolios From the Center Street Studio, Exhibition Review

Night, Truck, Two Lights Burning, a short story by Peter Turchi
Inspired by the drawings of the artist, it was listed as one of 100 Notable Stories of 2002 by the editors of Best American Short Stories

The Washington Times, 8 December 2001
Lichtenstein and Beyond: Recent Acquisitions of Modern Prints at the Corcoran, Exhibition Review