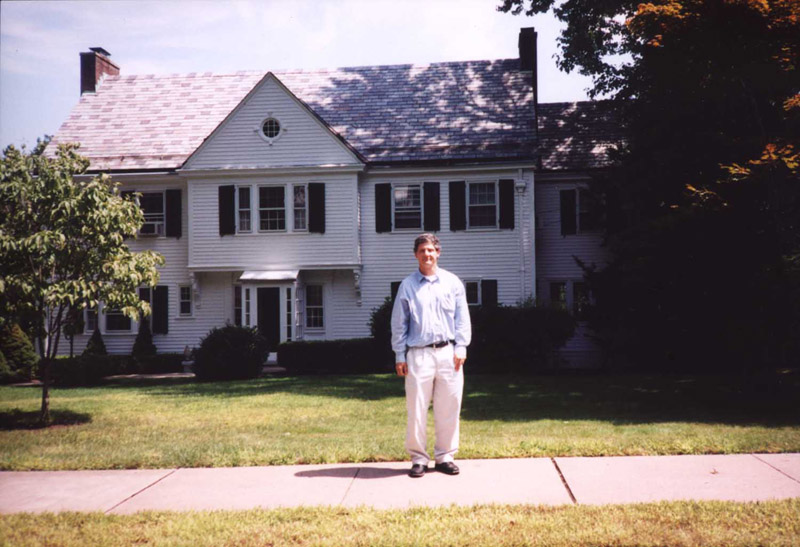 In his early years, Stevens tried journalism and law in New York City but eventually settled in Connecticut to work for the Hartford Accident and Indemnity Company. Stevens was good at insurance; he spent thirty years in the company and rose to the position of vice-president. Stevens was also good at writing poetry.

Wallace Stevens didn’t drive; he walked the two mile stretch to the office and two miles back each working day. On those walks he composed in his head some of the most powerful and significant poetry of our age; perhaps any age. Stevens once said,” It gives a man character as a poet to have this daily contact with a job”. I certainly feel that having a career interpenetrate my artist life has benefited me.

I have had the good fortune to do curatorial work for a living. The position has fed my intellectual curiosity, provided high artistic models to follow, and offered financial security. I make the art I want to make; and keep the often-destructive pressure of selling my art for a living at bay. And I have flourished in the time constraints that accompany having two careers and have developed tools that complement the situation; I keep my journal with me at all times; I milk my early morning hours in the studio for all they are worth. And I have benefited from relationships with scores of interesting and wonderful people.

Stevens got up early and read; he composed on the streets as he walked (and sometimes at lunch). And when he arrived at his job something about the contact of the real world and real people and real life situations provided an added level of input and ferment. I think that is what Stevens may have meant by character. Cultivating the outside world in all its forms and contexts to use as grist for the mill in order to extract the broadest understandings of life.

By the way; walks are something that have buoyed many creative minds. According to psychologist and author Mihaly Csikszentmihalyi (pronounced “chick-SENT-me high”) who has studied the lives of creative people, walking is one of the activities where sensations of the highest levels of creativity are reported. Stevens alludes to the percolation of the walk; the regenerative inhale and fecund exhale at the beginning of section VII of his poem, Notes Toward a Supreme Fiction.

“…Perhaps
The truth depends on a walk around a lake,
A composing as the body tires, a stop
To see hepatica, a stop to watch
A definition growing certain and
A wait within that certainty, a rest
In the swags of pine-trees bordering the lake.”

If I were to introduce the poems of Wallace Stevens to a newcomer, I would probably select one of his still life pieces. Here we feel the complex and incremental walk of the eye:

Link to Study of Two Pears by Wallace Stevens.

Note: 8 January 2016. The University of Pennsylvania recently released recordings of Wallace Stevens reading his poetry.  Listen to them here.