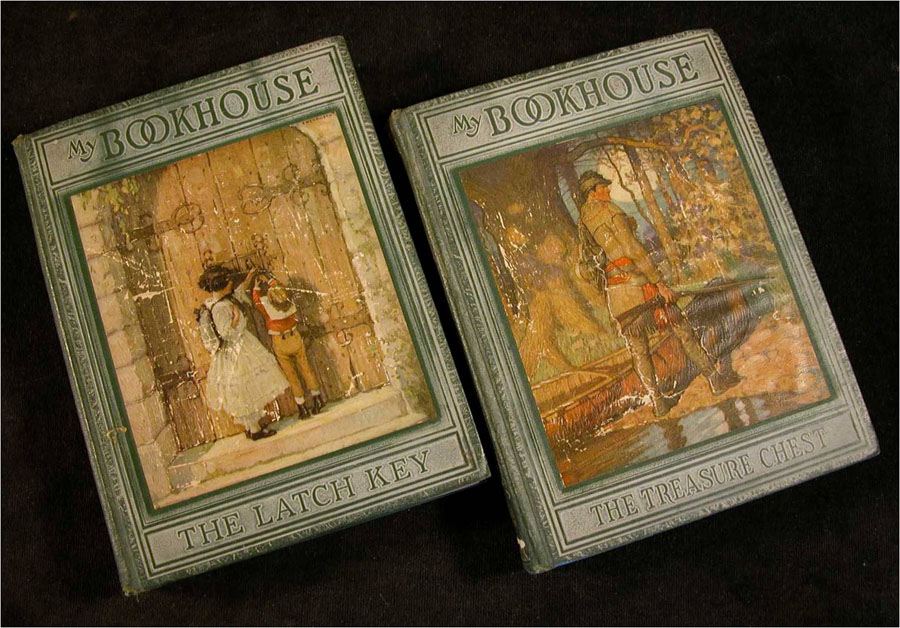 My Bookhouse. Two volumes from a set of six, The Latch Key, volume four (left) with cover by Joseph Cheneweth and The Treasure Chest, volume six (right) with cover by N.C Wyeth.

I treasure early memories of visiting my grandparents’ house in North Carolina where before bedtime we could read from My Bookhouse. These six gorgeous volumes (two are pictured above), published in the 1920’s, are filled with all the children’s stories you can think of, plus some, and embellished with works by Howard Pyle, N. C. Wyeth, and many others who forged the golden age of American illustration. My Bookhouse probably represents my first recollection of art as art.

How I love these images. They always surprise. You can never tell where they will be when you turn the page. They are imaginatively configured; often shaped irregularly, stretching across the top, or bottom, or up the side margins. Their use of color is savvy too; just a few hues blossom into alchemy greater than the parts with maximum expressive effect. And the dense, sparkly, letterpress type was an invigorator. It commanded your eyes to move through pages like waves. Even the lesser known artists could be fabulous. As an example, look at the Sugar Plum Tree by Eugene Field, illustrated by Donn P. Crane (see below). Crane is not a well known figure, but these images embody all that I mention above and have stuck with me for many, many years. With my deep interest in dreams, it is surely no accident my favorite poem beckoned to the garden of shut-eye town and a land of visions.

When I look at the pages of my journals (see below), I can’t help but think that in my own way I have been trying to create a Bookhouse of my own. I covet the element of surprise in My Bookhouse, the use of limited color to maximum effect, and dense regiments of words cultivated as expressive elements. And certainly the words “book” and “house” resonate off of my artistic trajectory. I believe that some of our earliest worldly encounters are the most powerful and lasting. My Bookhouse was fundamental for me. 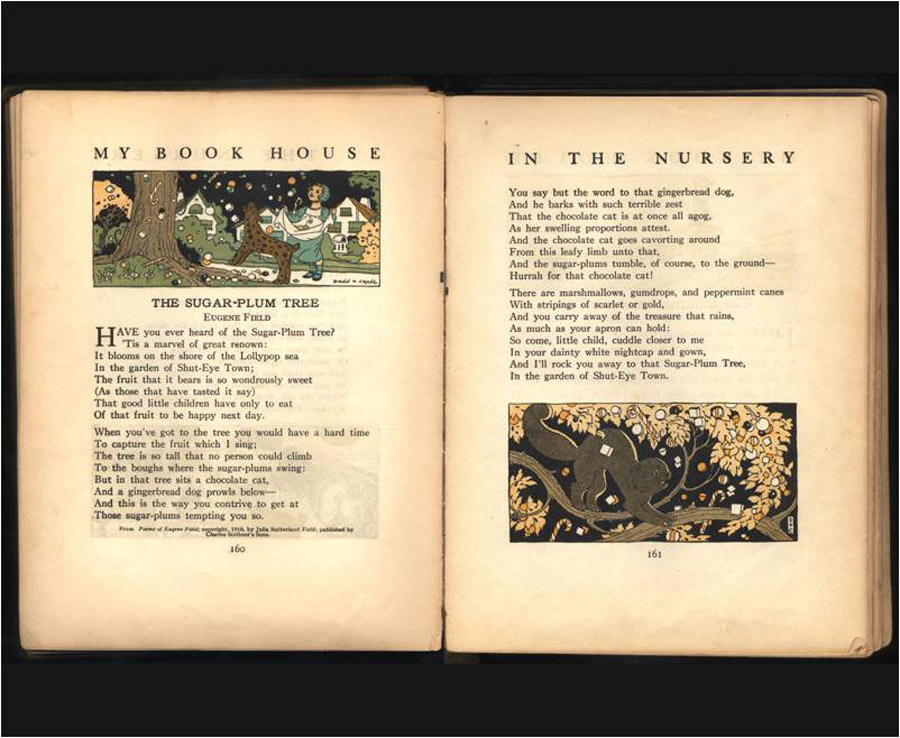 My Bookhouse, In the Nursery, volume one, pp. 160-161, The Sugar Plum Tree, by Eugene Field, illustrated by Donn P. Crane. Edited by Olive Beaupre Miller, Published by The Bookhouse for Children, Chicago and Toronto, 1925 edition.

Charles Ritchie, Book 122, Jourrnal entries for 2-3 August 2002 including several studies for works in the Self-Portrait with Night series, watercolor, graphite, and pen and ink on Arches paper, 4 x 12″.

Footnote: Donn P. Crane went on to illustrate many story and textbooks through the early and mid-20th century, even contributing to the Dick and Jane series that taught a generation of Americans to read in the 1950s.