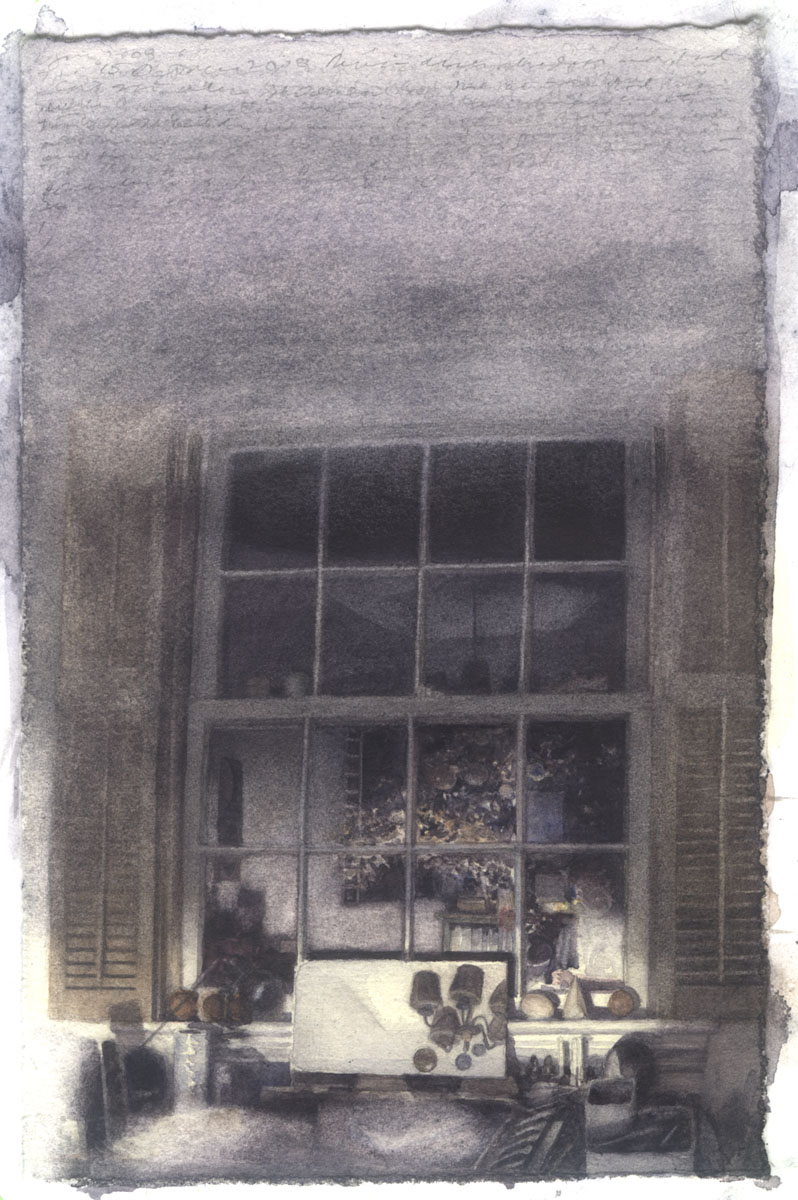 Charles Ritchie, (work in progress) Self-Portrait with Planets II [working title], watercolor and graphite on Fabriano paper, 4 x 6″. Note the scrubbed areas in lower foreground appearing as white patches at left and center on the of the dark desktop.

In my previous online journal entry I discussed scrubbing, a process I use to remove color from a watercolor. After further reviewing the corrected drawing, I realized I may not have gone far enough in subtracting from the image. I went back to my original sketchbook studies and found that elements in the foreground had been drawn in as an afterthought. These elements, two books (see image here), were flashes of brightness that kept the eye from resting in the horizontal band of light that runs through the lower part of the picture. Not that allowing a picture to grow differently than planned is a bad thing. I simply felt that these new elements were distracting from the whole.

The books are now removed. I dipped a ½ inch acrylic flat brush in water and rubbed the books out (see above), one at lower center and the one on the left. Although I really liked my drawing of these elements, I realized I couldn’t allow myself to be precious with them, so I gave them up to support the whole of the composition.

I once heard a story about the great American painter, Thomas Eakins. Perhaps the tale is apocryphal; I haven’t been able to find the reference in recent years. The story goes that when Eakins’ wife Susan saw a portrait that Thomas was working on, she marveled at one of the hands he had painted, exclaiming, “I believe this is the most beautiful hand you have done.” Eakins walked over and scrubbed the oil paint away, removing the hand completely. The painter then explained that the rest of the picture would never come up to the level of that portion. He would start again to try to make the composition work overall.

The message in the story for me is that it takes courage and ruthlessness to take an image to a higher level. My own picture might have taken a leap forward with this scrubbing action, or I may have destroyed the image, creating a picture I can’t resolve. What is important to me is that I am ready to sacrifice to grow. It’s also good to remember that I have many works in progress. This is just one of them. I’ll put this piece on the back of the pile for a while, and stumble on it later; let it surprise me.

There is a photograph of the Italian painter Giorgio Morandi’s easel that shows the massive pile of dried oil paint that had accumulated on the crossbar after years of scraping away in order to revise. “Here are most of my paintings”, Morandi reportedly said when he showed the scrapings. [Note, January 2016: the photograph of Morandi's easel with with a large pile of dried paint scraped and left on the horizontal tray can be seen in the book, Giorgio Morandi's Studio: Photographs by Gianni Berengo Gardin.]