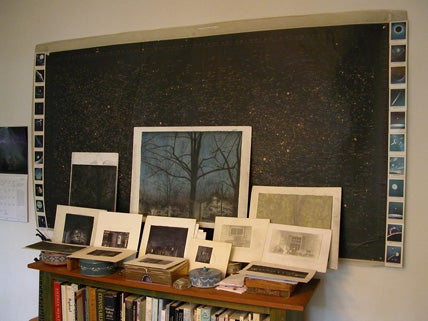 (above) Works in progress photographed in the artist’s studio before framing, July 2011. These drawings, now complete, are to be featured in the exhibition at Gallery Joe, Philadelphia, Pennsylvania, Fall 2011. For a discussion of the star map pictured, see the journal entry, Mapping the Night.

In recent years I’ve gravitated towards the writings of Wallace Stevens. For me, unraveling Stevens’ poetry often requires many readings over extended periods. As with the best drawings and paintings whose secrets unfold slowly, I covet the instants when the obscurity flickers into legibility.

Not long ago I approached the end of one of Stevens’ great poems, An Ordinary Evening in New Haven. The final lines of the poem leapt at me, reviving sensations I experienced while making recent drawings. The following three lines are the poet’s words that struck home:

Graphite and conté crayon have become increasingly important for me as material, cultivated as a slow buildup of powdery shadings. Moreover, I’ve come to love their transitional effects; the shadowy granularity of conté crayon and the mercurial reflectivity of graphite. I often combine these friable media, using them in concert with other media as well. To my mind, Stevens attempts in his poem to arrest not only the fleeting effects of light and shadow, but stretches to grapple with the ineffability of reality itself. What a goal.

I adopted the phrase “dust and shade” as exhibition title and Stevens’ lines inspired the two paragraphs I prepared for the show:

“The drawings in this exhibition evolved in front of subjects I have studied for more than twenty five years. Passing time is reflected in changing motifs and through tracked inscriptions of dates and dreams. Lifelong projects underpin my work; a series of journals begun in 1977 now numbers 135 books. A drawing started in 1986, Landscape: Dust and Shade, continues.”

“Dust is the essential drawing medium. Whether painted as a wash, rubbed with powdery fingers, or drawn in hardened pencils, the shades of light and dark are dust veiling and revealing the image. Poet Wallace Stevens often sought to pinpoint the locus of reality: does it reside in the physical dust, the force of time, or the shadings of the imagination? My desire is to spend a lifetime before my subjects to try and see.”

Incidentally, Stevens, a devotee of classical literature, probably adapted elements of his verse from a much earlier poem by Francesco Petrarca, Soleasi Nel Mio Cor (She ruled in beauty o’er this heart of mine). In English, we know the source as Petrarch, the Italian poet who developed a sonnet form employed by Dante, Shakespeare, and many others.

We are but dust and shade.